I’m walking down the street and I see two girlfriends waiting for the bus. They’re spending their time waiting with 1 phone and 100 poses and facial expressions.
I’m sitting at a terrace and next to me sits a group of friends. They bend themselves in impossible postures around the table so they will all fit within the picture taken by that one little camera. Just one more…
I’m at the gym where I see through the mirror how mr. Muscle tries to capture his results for his followers. Unsatisfied about the outcome, remaining to try new poses over and over again.

Selfies. Not a day goes by without a selfie. If you don’t take one yourself, it will appear on your timeline or you can find one at the busstop. Once a hip and happening, a hype, a trend. Nowadays it’s a lifestyle, a belief system and even a profession. And I’m also participating. My relationship with selfies is all about love and hate. Where I once might have been a pioneer, using my very first digital camera with self-timer. I also tend to say that selfies should be banned. Because why do we take selfies? What are we actually showing?

“Once it was all uploaded to the computer, 90% ended up in the trash bin”

I took my first selfies when I was 16 years old, trying to take nice pictures of my self. And it took a lot of time… Walking back and forward to check the results on my camera, disappointedly resetting my camera and trying a new pose. Once it was all uploaded to the computer, 90% ended up in the trash bin, 8% was heavily photoshopped and 2% was allowed to stay in their original condition. And after that? I just spend 3 hours on taking selfies and I would keep my former profile picture from MSN (yes, the good old days!), an image of a cute labrador.

But the selfie evolved. The selfie cam at the front of your phone, a stick so that everyone could fit in de picture and we would be able to show some of the surroundings, and special hand gestures to avoid having to touch the button. How simple is that? And it still takes forever, we will forget the world around us and aren’t ever satisfied with the results. Because of bouncy hair, squeezing one eye more than the other, and what’s that between my teeth? We strive to capture perfection in one single picture. A snapshot in which we try to show what we are doing, who we are, where we are, what we are thinking, and even more. Sounds like an impossible task, doesn’t it?

For my premaster thesis I researched the possibility of capturing authentic emotions in posed pictures. A very interesting subject, I must say. I thought it wasn’t possible, because you’d know the presents of the camera, which will automatically influence your behaviour, attituce and emotion. Some researchers confirmed my hypotheses. Where a smile was the only feature which would show some authenticity, because it has the connotation of sympathy, honesty and humor. But it’s different for women, because we tend to smile a lot already, smiling at the camera will makes us appear less reliable.

The selfie is the best example of a posed portrait. And you will be even more aware of the camera, as you’re the one holding it and taking the picture. But how do we put the fun back in taking selfies? With a #1clickpost! You take one picture and you post it. In exchange you’ll receive a lot of extra time, be less judgemental on yourself and eventually you will get more confident. I’m asking you to challenge yourself by participating witht he #1clickpost challenge from the 1st of July until the 8th. Check the Facebook event for more information or send me a message! 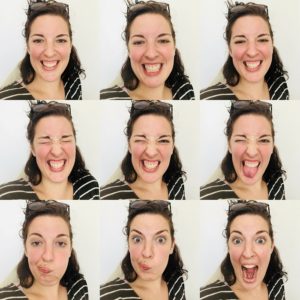